The greatest threat to our planet is the belief that someone else will save it.” – Robert Swan OBE, the first man in history to walk to both the North and South Poles. The threat here refers to Climate Change, which is inevitable.

As per Wikipedia, Climate change occurs when changes in Earth’s climate system result in new weather patterns that last for at least a few decades, and maybe for millions of years. In simple terms, a relatively permanent change in earth’s climatic conditions is termed as Climate Change. Earth’s climate is determined largely by the incoming solar radiation and radiation lost in space. Factors causing climate change are either internal on which we have no control or external which are man-made. Nature has its own mechanism of dealing with factors that can cause climate change, but off lately, for past 20-30 years, humans have interfered with the atmosphere to such an extent that climate change has become inevitable. The most important factor responsible for climate change is the rise in the ambient temperature of the atmosphere. But what’s causing this rise is 100% anthropogenic in nature. Incoming radiation is getting trapped into the atmosphere due to the rise of concentration of greenhouse gases. Greenhouse gases majorly, CO2, CH4, Nitrous oxide, fluorinated gases, ozone, etc. are released due to various human activities like electricity and heat production, transportation, agriculture, construction, etc. 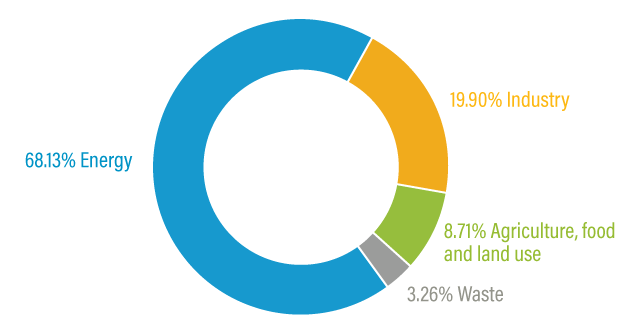 Out of this, Energy Sector is the Largest contributor to GHG Emissions in India followed by industry, agriculture, forestry, land use. The current concentration of CO2 is 415ppm. This has a direct correlation with the global temperature rise from the pre-industrial era. 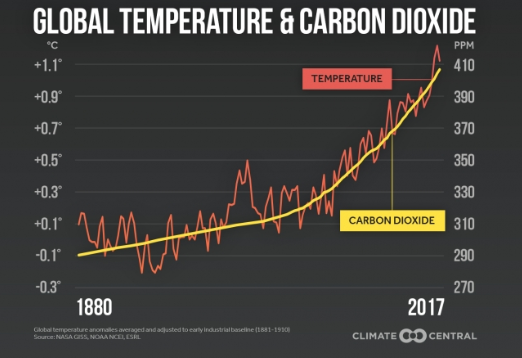 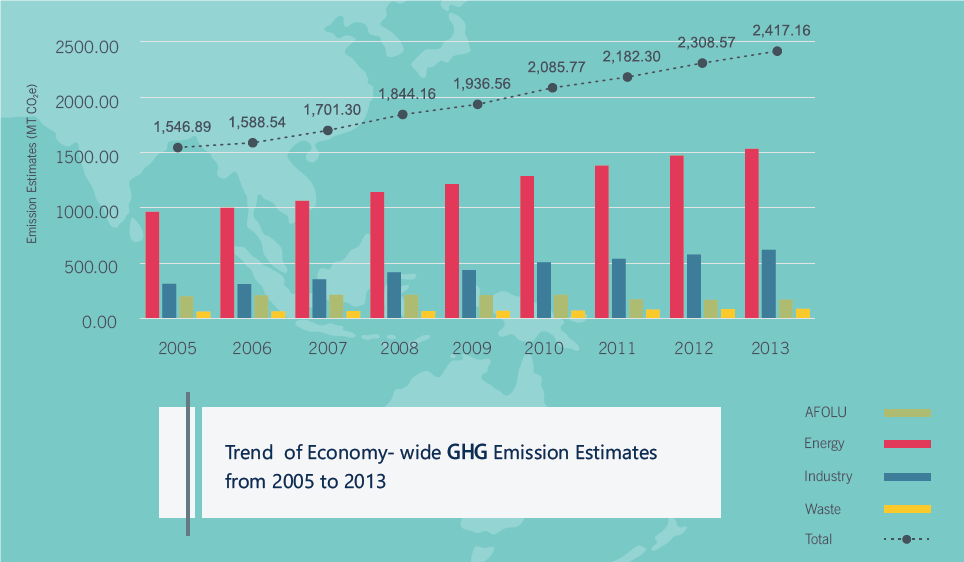 The Intergovernmental Panel on Climate Change (IPCC) Special Report on Global Warming of 1.5°C showed how keeping temperature increases below 2°C would reduce the risks to human well-being, ecosystems and sustainable development. At the current rate of emissions, the global temperature rise will reach 1.5°C warming between 2030 and 2052. Within the energy sector, about 77 percent comes from electricity generation, mainly due to the current fuel-mix within domestic installed capacities. After the Industrial Revolution, the energy was considered to be the driver of growth of an economy. India is expected to be one of the fastest-growing economies of the world soon. But every time, economic growth and GHG emissions need not move together.

One of the most effective ways to decouple economic growth and emissions growth is by changing the energy mix of the country. The current energy mix is dominated by coal, although this figure is reducing year – on – year. Fossil fuel-based electricity generation is 56% whereas renewable energy sources contribute just about 22%. Out of which, Solar energy contributes about 8% of the total installed capacity of India. 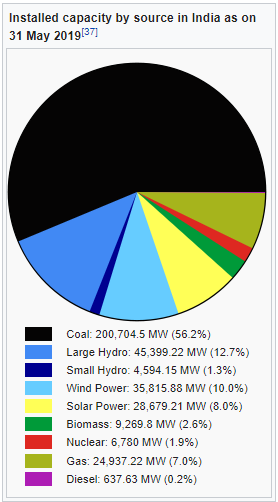 Govt of India has laid down National Electricity Plan to check emissions growth by adopting cleaner technologies, no further addition of the fossil-based power plants, commitment to producing 40% electricity by non-fossil fuel-based plants and resource and energy efficiency by 2030.

Solar Energy as a solution for avoiding Climate Change?

Solar energy alone cannot avoid climate change, in fact, the rate at which emissions are growing on this earth, even after the Paris Accord, 2015, there is no scope that global rise in temperature isn’t going to happen, but what we can do is prolong it. Delay the effects of climate change by checking upon the rate at which emissions are growing. As stated earlier, adoption to cleaner energy practices sure has the potential to contain emissions if not abate it. Empirically speaking, 1 KWh of electricity generation produces about 0.9 KG CO2 eq. as per the current energy mix of India. This metrics is also called Carbon Intensity and is used to measure emissions per unit of power produced. The carbon intensity of grid power varies between locations, from around 900 gCO2eq/kWh in India to around 500 gCO2eq/kWh in the UK and lesser in countries of Europe and Nordic regions. The amount of emissions thus avoided also depend upon the technology as well the place where solar power is going to be produced as the irradiation potential is different geographically. This quantity is influenced by the solar plant installed (typically 1000-2000 kWh/Wp/year, depending on location) and the system lifetime which is typically 25 years. The resulting values are in the range 20 to 40 gCO2/kWh for solar power generation in Europe, to 80 gCO2/kWh in a coal-dominated economy, such as China, India, etc. Hence, with increasing solar power generation in the mix, GHG emissions can be controlled and so is the global rise in temperature. In simple words, Fossil Fuel + Power Plant = Energy + Emissions ——–(1) Conventional power plants take coal, oil, gas as a fuel to generate electricity, but we get emissions as a by-product. Sun + Power Plant = Energy ——————————-(2) Renewable power plants like solar, wind use sunlight, wind respectively to generate electricity, and there are no by-products. Poor/ Under-developed country + Energy = Economic Growth You can replace the “Energy” from either 1 or 2, What do you think you would choose?

How can you make a difference?

We all are consumers of electricity, but we hardly care from where it is coming from. In India, as we have seen before, 56% of electricity is still coming from thermal power plants which are coal-based. So, let’s take small steps to reduce emissions. Instead of consumers, become “prosumers”, and produce your own electricity for your house. If you own a house or have a terrace which can be utilized for a solar power plant, do it. Your contribution may be small, but there are millions of houses in our country which if get power from the sun, will make a difference in the emissions, and in turn, will help fight climate change.   [1] WRI.org [2] Climatecentral.org [3] Ghgplatform-india.org [4] Wikipedia.org

Know All about National Portal for Rooftop Solar

The Prime Minister launched the National Portal for Rooftop Solar [...]

Solar photovoltaic technology is making electricity green and reliable for [...]

India receives ample sunlight throughout the year. It is time [...]